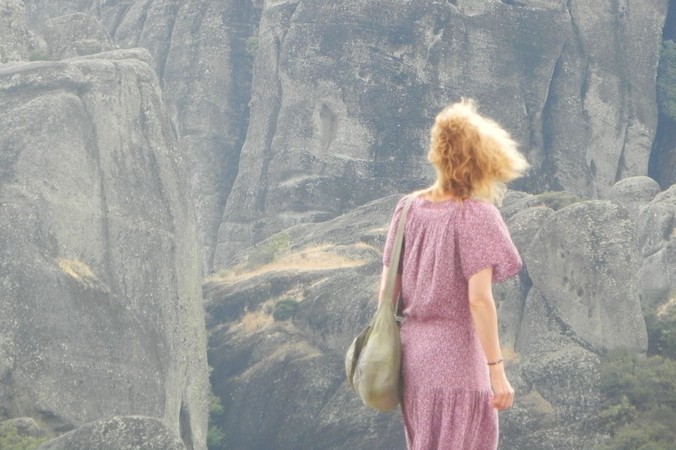 I have believed in God since I can remember though I don’t know really why because my parents were unbelievers (I was raised in communist Poland). I was full of irrational phobias and obsessions, sometimes bordering on panic and mainly connected with hypochondria and fear of death. I was estranged and very lonely. My dominant feeling was that of a hunted animal. As a teenager I went to punk concerts and was fascinated by their nihilistic philosophy.

I  accused God of my suffering and was afraid that He can hurt me even more.

Many decades later it turned out I was intended for abortion and I live only “by accident” – the doctor didn’t turn out on the appointed day. Although my mother finally accepted me her love was stained by sense of guilt and over-protectiveness. My father was emotionally withdrawn, often angry but his premature death was an enormous shock to me. Also I had an oncological surgery at a young age, which totally ruined my sensitive psyche.

Later I read in medical sources that my symptoms were probably caused by PASS (post abortion survival syndrome). It was quite acute because not only I was to be killed but my sibling was actually aborted. Around this time, being still an infant,  I became seriously ill and refused to eat because of separation pain (parents couldn’t stay with their children at hospitals then in Poland). This experience contributed to my distrust of God and people as well as an iatrogenic trauma.

My emotional life was also wrecked by a platonic fascination with an university classmate, so overwhelming that, in some sense, I struggle with it to this day, not to mention that it strongly disturbed attachment to my husband.

My marriage turned out to be a very difficult relationship, not free from emotional abuse. I also had to face my son’s problems including a severe depression.

Summing it up, I had a strongly unsettled personality and a false image of God. Though I joined an evangelical community and was baptised in 2000 I was a very reluctant disciple of Christ, concentrated on myself, forlorn, angry and constantly looking back…

Some years ago the problems in my life cumulated and I developed new symptoms – obsessive autodestructive thoughts.

It was the worst nightmare of my whole life. I was conscious of vicious invisible creatures surrounding me – somehow I knew they had something in common with the force who wanted to kill me in the very beginning and I clearly felt that they came back to finish this work. A sneering voice repeated to me that I shouldn’t exist, that nobody wanted me. I couldn’t stop thinking of killing myself and had vivid pictures of myself dead. At the same time I realised that these were NOT my thoughts! I had to repeat aloud “I don’t want to kill myself” and I prayed to somehow survive the next  minute and hour.

In the climax of this agony, looking for some way out, I typed some distressful words in google search and… Jesus.net website popped out… there I found a “sinner’s prayer” which I knew by heart but had never really grasped. It was telling me to give my life to Jesus who will make me the person He wants me to be…

It was for me a literal rescue, a life and death matter. As a victim myself I could never fully understand and accept Jesus’ sacrifice and now He came to save me from myself! I will never forget the vision of His face, smiling tenderly, without reproach but with full understanding and saying – “see, I had to do it for you!”

On this website I also found “Father’s Love Letter” which I also once knew but could never really believe… again it finally cried to me like a wail, a call of a wistful Parent. I realised that my only delivery is to trust this Being whom I accused of all evil in my life.

I literally felt like being held in His hand – I felt that  I’m, as a prophet says, “carved in the palm of his hand” and that “even if my father and mother left me He will take me in”.

Everything that I had repeatedly read in the Bible and didn’t understand or “feel” came to me full of life and meaning.

When I opened my numb, as if fossilised heart to God never before had I experienced such comprehensive acceptance, tenderness and unconditional love. As a Psalm says – “under His wings I found shelter“.

I started to get to know God in His infinite goodness and love and without hesitation commited my life to Him. In spite of everything that my situation, emotions and mind told me I decided to believe that this Being is my beloved Daddy who literally pulled me out from the pit of destruction (my “favourite” autodestructive obsessions were connected with falling). He gave me freedom and victory. He’s closer to me than my heartbeat. He is this Treasure and Pearl from the parable in the Gospel of Matthew 13:44.

There was a day when I addressed the evil ones who sometimes returned to torture me – “Get out of here you liers, now I have come with my powerful Daddy! You are defeated by the blood of Jesus and I am free!”

I decided to cut the vicious circle of violence and forgave everyone who hurt me and also asked for forgiveness. The relationship with my Mom (who is now a keen believer) was fully restored. To pass on the love that I received from the Father I became a volunteer of the overdenominational web project jesus.net which originally led me to Jesus.

I still have to control my thoughts and emotions and there’re still wounds to be healed. The biggest current problem in my life – my marriage – hasn’t thouroughly changed for good yet, but I can now be loving and peaceful.

But the most important thing is that  I’ve got the Father!!!

Turn to Jesus – He will lead you to the Father – He will save your life in every meaning of this word, He will rescue you!