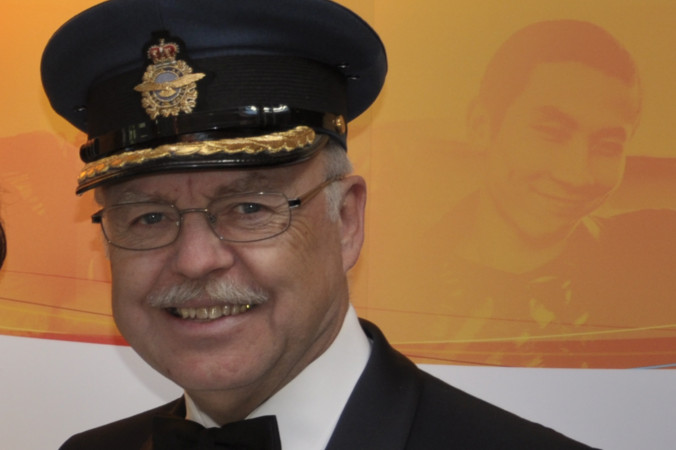 Airforce Pilot at a Crossroad

The Canadian Forces took me, Major Wes Bowers, around the world. An air force pilot for 20 years, I flew missions in the Gulf War, served in UN headquarters as a staff officer in Somalia and as a UN peacekeeper in Lebanon, Israel, and Syria. And along the way, I went from being a peacekeeper to working for the Prince of Peace.

I was raised by Christian parents, but when it came time to make my own decision to believe in Jesus Christ, I have to admit, I cut corners. I really only took out the “proverbial fire insurance salvation policy.” I believed only because it would get me to heaven. I didn’t really care for a relationship with God. I didn’t recognize Jesus as the Lord of my life. Instead, I began to move gradually further and further from what my parents taught me.

Fortunately, before going too far down that road, I married a Christian girl.

But as I continued my education and then moved into the workforce, I started to forget about God. I began a career as a teacher after finishing university, but the lure of a life of travel, adventure, and excitement changed my plans and I joined the Canadian Forces in 1973 and received pilot training.

Three years into my flying career I made another change in my life, but this time the consequences would be eternal.

During a routine flight over a remote region of Ontario, the weather turned sour and I decided I needed to land my helicopter immediately. But I quickly realized I was trapped in a steep-walled valley with increasing clouds and pouring rain. The helicopter I was flying was not properly equipped to fly in cloud so I had to remain within sight of the ground. To make matters worse, I was rapidly running out of daylight and there was no safe landing area to be found.

I thought to myself, I could die here! I had a strange sense of being “one step from eternity.” Yet, I did not feel prepared to stand before God after I died and give an account of my life. And now finally, God had my attention.

It all comes home when you have a test in your life. Alone and in the tiny cockpit of my helicopter, I made a decision that would change the course of my life: I turned my situation over to the Lord, whether I lived or died was up to him. I said out loud to God, “Lord, I realize I don’t have the right to ask you for any favors. But if you give me a second chance and show me the way out, this time I promise to follow your leadership.”

God heard my prayer and gave me a chance to prove my sincerity. Suddenly, and inexplicably, my anxiety left and I felt quite calm as I placed my life in God’s hands. As I continued to circle the valley, strangely, the sky seemed less dark in one area and I somehow felt drawn to fly in that direction.

I managed to navigate out of the valley and ended up landing at the nearest farm. When I landed I did two things: I thanked God for saving my life and then I told him I would need his help to keep my part of the deal.

Things gradually began to change in my life after that day and my concept of trusting God began to grow. And for this military officer and his wife, Gail, these changes were long overdue.

The importance of family

Some military men have a tendency to value their military career more than their wife and children. I had to learn how to talk to my wife and how to love my wife better. It’s a significant task to build a marriage and family. I’ve learned that you’re in it together.

I also decided that spending Friday evenings at the bar with my pilot friends until late at night was not healthy for my marriage and family. It was a struggle for me to give that up, but I realized that I would have to choose to follow God’s leadership on a daily basis and this was what was best for my family and me. God gave me the power to change.

Today, Gail and I have been married for over 40 years and we take joy in spending time with our grandchildren.

After 20 years of flying for the Canadian Forces, I retired from active duty in 1993. I returned to academic life for a time and attended seminary.

In 1995 I joined the staff of Campus Crusade for Christ and began working in the Leadership Ministry. I currently work in the TruthMedia Internet Ministry, taking the gospel message to people around the world through the Internet. For Major Wes Bowers, this is the ultimate promotion. I’ve gone from being a Peacekeeper to working for the Prince of Peace.

My life experience has taught me that drifting away from God is harmful to one's self-worth as well as to relationships with family, friends and co-workers. I wish I knew then, what I know now—the key to a growing sense of fulfillment and a sense of purpose in life is to learn how life-changing it can be to follow God’s leadership through a personal relationship with Jesus Christ.

If you have any questions, I'd love to help you on your spiritual journey. Just send me a message.