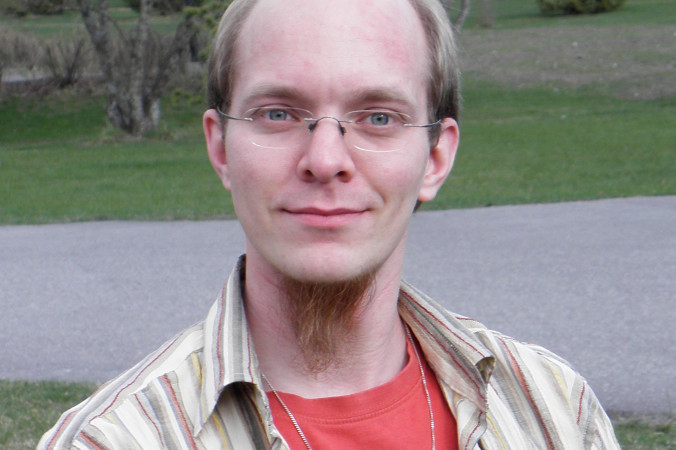 – How am I different from a heap of space-dust?

– By the different arrangement of atoms.

– So there is no fundamental difference?

– What's the point of being alive?

– Not much; just getting one's genes to the next generation. That's what evolution is concerned about.

– But that's also just a product of chance and ultimately not meaningful.

That's a short approximation of my thoughts the first time I considered ending my life. I don't remember how old I was, probably from 10 to 13 years old.

I had received a good upbringing in a beautiful rural area of Finland, but I was very shy and had only few friends and I trusted no one enough to talk about everything. Probably because of this I spend quite a lot of time playing computer games and watching TV when there was no special reason not to. I loved documentaries that were about nature and cosmology. And just about every documentary about space tells the story of the Big Bang that just banged itself and that's why we are here, a microscopic spec in the vast universe. Insignificant in every way. At some point I connected the dots: God didn't make the Universe and we know how everything developed without God, so God does not exist. Therefore there is no reason to pray and those who think any god exists just are not smart enough to notice the truth. There was no point to anything.

On the summer when I was 15 I had to go to a confirmation school camp (where young people learn about Christianity). In Finland it's a tradition and something like 70-80% of all young people go there. I didn't much like going, because I was shy and only knew two out of the 30 people on the camp. On the first night of the camp we had a compulsory prayer as a group. There was something different in the air during that time. I felt it was more than just a bunch of people together talking to a non-existent god. Afterwards I learned that some others had felt it too. On the evenings that followed the prayers were voluntary, but practically everyone participated in them – including me.

During the camp we had study sessions and the salvation-story according to Christianity (also known as the gospel) became more familiar to me. I understood it quite well but the big block about accepting it as true was the idea of god-believing people to be just too stupid to notice they were wrong. This changed when the pastor talked about who were witnessing about Christianity and Jesus as the son of God. He started from the disciples and the Roman centurion at the cross all the way to a third of the World's population today. That's a lot of people and not all of them could be stupid; that would be just too improbable. There had to be some smart people even among Christians. So maybe I should consider it to be true and act accordingly?

So I started taking the teachings of Christianity as true. The first truth that had a huge impact was that I was created on purpose and the purpose was important enough for someone to die for. So my life went from being insignificant to important and every important thing has a meaning. The next question was obviously “What is that meaning?” To that question I have not found a definite answer but I have found some good candidates.

In any case, I am no longer meaningless, and neither are other people. Also, if Christianity is true, I should learn everything I can about it, so I have almost fallen in love with the intellectual side of Christian theism. There is a lot of Christian philosophy that can stand up toe-to-toe with any other model I have found and many times just flat out triumph over others. The Bible calls the Christian God “the only wise God” for a reason! (Romans 16:27 in NIV, ESV, NASB and others.)

Being a Christian believer is not synonymous to easy life, but it is almost synonymous to meaningful and true life. I still have many unanswered questions, but the big picture is more coherent and complete than it would be without God. But that's life: it's a journey and you can always develop and become better at things and, as in a journey, one of the most important things is how and where you finish.