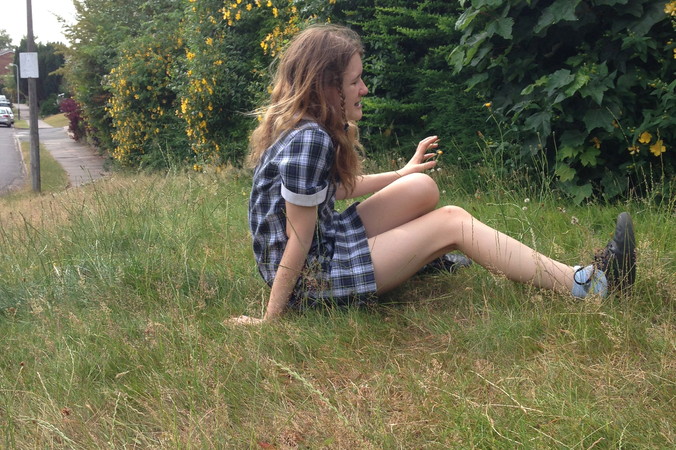 I'm not going to sugar coat this... So don't expect a happy ending... Or a great joyous record of my life.

My names Kira, kira jade. I was born early in the morning before the work was officially awake when only darkness and silence filled the sky. I was a sickly baby I was born late, 2 days late. They thought that I was a gonna but fourtunately my underweight fragile body managed to power through it. I guess you could say I'm a fighter. I may not be physically strong but emotionally I am stonger spider silk. I'm 14 I carry out a normal teenagers life consumed in my phone.  Well thats waht people say. But deep inside no one knows the scars that have been left tearing my soul...piece by piece. I was diagnosed with CVS when I was 3. Your probably wondering what that means? If you take a guess from the name 'cyclical vomiting syndrome' that it is quite disgusting... well you're right. When I'm scared, tired or even hungry I will throw up and continue to until it becomes blood and... SMACK I blackout and wake up with doctors and nurses crowding me. I remeber one time they though I was gone... I wish I had gone. I was happy then. I guess you could say in my prime time. I was young and couldn't give a care about the world, i just lived my life to the fullest... Now... Well thats a different story. I was never particually an oustanding gifted student and i was never a popular girl but I didn't need to be I loved everything everyone. Once I started secondary school i was frightened anxious of what people would think of me. I remeber everynight i would obsess with the idea of the new perfect school which i had managed to pass one of the hardest exams to get into. Year 7 was probably the most rapid year. Everyone started to find there feet. By year 8 everyone had settled down including me. However I associated myself with the wrong people I was too eager to not be alone, in to much of a rush to choose wisely. After a couple of weeks i finally realised this. Pastral care everyday after school during school hours during breaks during lunch. On the whole I probably missed around 2 hours of school a day.

They made us serperate they caused us to split. If it hadn't have been for her it would have stayed the same and maybe i would not be as alone as i am now. Luckily for me 2 months before we went into year 9 I met my dream friendhship. I was so so so happy. It was the first time i had ever laughed and meant it. Every hour, every minute, i spent clutching onto my 'perfect group' hoping a praying nothing would tear us apart. I guess i should have believed in God sooner as to answer my prayers by the end of Year 9, the year of form changing, broke us apart. I was put in  form by myself. Whilst they were still happily together. They promised that no matter what we would be 'forever' by they obviously didn't mean it as I spent every lunch alone in the toilets crying. But then...

I picked myself up. I wiped my tears. I got on with my life. I studied hard. Became the A* student I had longed to be. And to my suprise a group of people wanted to become my friends. I gladly excepted their invitations not fully realising their perosnalities. I'm not gonna I became quite fragile and pathetic pandering to their every needs. I became ever more dependent on their friendship.

Year 9 resisdential to Devon. My illness had got way worse. Throughout the majority of my child hood i spent most of my time in hospital with drip needles being pierced through my skin the sheer volume of scars on my hand created a distorted shine to my palms- a constant reminder of my disability. In year 6 I was only 3 stone due to the fact of not being able to keep down food.  For the year 9 trip i was going to have to stay in a B&B with my mum as i needed to be closely monitored for any signs of being sick. The build up to the trip was quite heavy and dramatic. There was bitching right hand and centre. So the day of the trip my birthday. I had an epsiode. I threw up 16 hours straight on the 6 hour trip. Blood pigmented my blood. My stomach clenched like a fist. My mum called and told my school that i couldn't come whom were very apoligetic, hoping i got better soon. I recieved no birthday messages that day, no get better soon. I checked my phone repeatdly. a week passed and still nothing. When school arrived again and everyone was back. I walked into my form room. I felt 30 peoples eyes burn my face starring as i walked through the door. Nobody talked to me but whispers echoed throughout the room. Everyone knew i had gone to hospital on my birthday yet no one... no one seemed to care. It carried on for a month or two. I tried to talk to people but they turned away and resumed their converstaions.

Jess she came up to me and said 'Kira... Gosh Kira... what do I say... There was a lot of stuff about you said on that trip... Hmm'. That was the first time someone had spoke to me in a month. More and more months passed by. I really didnt see the point anymore. I spent every moment alone. I just sit there observing the friendships i could have had and had had. It grew harder and harder.

People started to forget. They started to small talk with me. I gained a few aquantinces but only this year. Nobody wanted to get close with me unless i hurt them. On that Devon trip everyone said i was fake and a b**ch, that i lied about my illness that it was fake. I was a pathetic sore looser who deserved what had come to me... loneliness.

I went to the consultant this month... I thought it was good news, maybe a miraculous cure to my illness... No... I was wrong... They said im very ill... They dont know what to do with me anymore... I have tried too many drugs which have failed... In my eyes the remedy is happiness rather than anxiety to please... I am having to go to St thomas soon to have some tests... I now have to have 3 specialised doctors. It would be ok if i had some one to go through it with me but i don't.

See thats the other thing. My parents 16 years of happy marriage... gone... Well actually i wouldn't say happy. I remember when I was little hiding underneath tables crying with my toys whilst there long shouting sessions lasted. A couple of times my mum left and didnt come back for hours. I remember running bare foot into the road, i didn't care about cuts opening across my foot i wanted my mummy back. My mum grew unhappier but i guess i was too selfish to realise it. You see i knew this would i knew they would divorce one day but my heart longed for a family a proper family. All my family is in the north or italy. The only relatives which are any where near us are my grandma and grandad. Hes an alchoholic ruined 6 of my birthdays by falling over and having to go to hospital and now he wonders why his body is giving up on him. I feel sorry for him but he brough it upon himself 20 years of stable drinking cannot not be good for your brain and liver thats probably why he has had so many strokes.

My mums leaving soon. She has a 7 year visa in America so she is staying there , leaving me with my father. I used to lash out in anger at my dad hitting screaming its the only eay i knew how to protect myself from pain. I never thought he would do it back. He used to hit me so hard red hand prints would decorate my leg as well as deep purple bruises. I had to suck in my tears to not appear weak but strong.

Im alone and nobody can help me... not even you kind reader. I'm going to continue to cry myself to sleep because i have brought this on myself. I deserve every ounce of guilt and sheer fear. For i don't know what the future holds.

My advice to you is remeber its ok to be weak you dont have to put on a smile to make others happy. Be true to yourself... Live your life for yourself... NO ONE ELSE