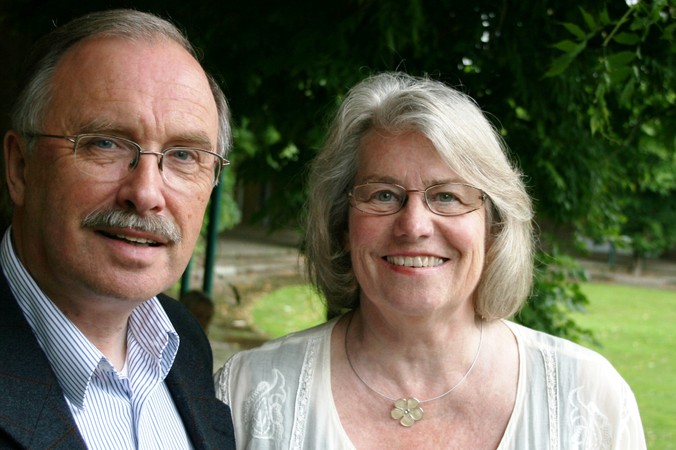 Anybody looking on would have said that my wife Pam and I led a charmed life in our mid-twenties. It felt like the world was at our feet with a horizon full of opportunity. I taught science at a dream job in a country secondary school in Mountbellew, County Galway having just finished research at the university in Galway with which I still kept ties. To this day I think it is the cultural centre of gravity in Ireland. And we were expecting our first child.

When the due date came I ended up in bed with bronchitis. So when the phone rang to say that the great moment was arriving, I hastily dressed and was bundled in to the Regional Hospital waiting room. A whole generation of Galway fathers know the nondescript walls of that room. But the doctor wanted to see me as soon as I came in.

The damage is done

He was young – only qualified a couple of years. I was immediately put off by something too solemn in the look of him. He got around to it quickly. “Mr. Wilson, I’m afraid we have some bad news for you. Your wife has given birth to a baby girl – but she was born with a difficult condition. Basically what it means is…” At this point I was staring straight through this guy’s head – hearing him but not hearing him. All I wanted to do was see Pam. So the doctor brought me to the recovery room right away and we walked as fast as decorum would allow.

It struck me to ask him, “But can this condition be corrected?”, “Well some cases are mild but I’m afraid…” He was “afraid” again. This wasn’t a mild case. “You see, the damage is already done.”

By this time I was at Pam’s bedside. We fell into each others’ arms, and my pride in her bearing my child was none the less for the baby’s condition – all the more, in fact, because her attitude was so collected. We prayed for wisdom and talked together.

After talking again with the medical staff I thanked them the best I knew how, checked on Pam who was by this time asleep, went home and wrote in my diary a verse from the Book of Job which we had recently studied at the request of student friends: “The Lord gave and the Lord has taken away. May the name of the Lord be praised.” The date was Valentine’s Day.

Siobhán was moved to the fever hospital where she lived the rest of her short life, Pam gathered strength back in the ward, I recovered and soon we were together back at home trying to reassemble our lives – me teaching in Mountbellew and Pam receiving family and kind visitors of all sorts. It’s tough on any woman to leave the maternity ward without her baby. She has to contend with all the things that people say to her and with all the people who don’t know what to say. Pam told people simply that we were very sad but that we trusted God because we already knew that he loved us.

On Monday morning, the 12th of March, I was called out of a maths class to take a phone call I had awaited for 26 days – Pam to say that Siobhán had died. She borrowed a friend’s Morris Minor and drove out to Mountbellew to pick me up. We drove back to Galway slowly. On the way we stopped to look over a fence at the new season’s lambs and think.

I don’t know why I hadn’t thought of funeral arrangements before, but I hadn’t. It’s funny – you cling on to life even irrationally while it’s there.

I went down to Willie Conneely, the undertaker in Market Street, to order a small coffin, and he asked me if I wanted something fancy. I said that no, I didn’t want a lot of extra trappings because from the best I could gather from the Bible, the baby was safe in heaven with God and no religious trimmings at this point would help her. I launched into an explanation of the Biblical account of King David’s statement when his infant died – “I shall go to him, but he will not return to me”, only to find Willie weeping.

“Isn’t it a crazy thing”, he said, “that you come in here to buy a coffin and me end up weeping, but I would love to have this confidence you have that you will go to be with God.” I explained that my confidence stemmed from the fact of Jesus taking my hell for me on the cross, and eventually I left his Willie’s Dickensian shop with a beautiful simple white coffin and with him much happier.

Never sung in the cemetery

In the cemetery I read out, from the last page of the Bible, the same beautiful words we had sent to the Irish Times, “Come Lord Jesus!”. We thanked God for Siobhán’s life, and Joe Noble, a dear friend who drove a taxi in town, sang the song, “O the deep, deep love of Jesus”. No big audience – just family, like my parents, friends, like Anna and Susan, and neighbours like Joe and Evelyn. Anna came round later to say that standing there that afternoon she had decided to invite Christ into her life too. “You see”, she said, “For all the times I’ve been to Rahoon Cemetery, I’ve never sung in it before”.

Now we had a new puzzle. How could a life-event of such acute sorrow yield good fruit like the change in Anna’s life? That’s sounds like an acute absurdity. Yet she was one of many.

We saw only one solution. God’s track-record with us was so solid that we were prepared to trust him with the absurdity, just as we did with the sorrow.

Never was I so glad that both Pam and I, separately, had made the same decision to put our confidence in Christ before we ever met each other, even though we’d lived thousands of miles apart. But that’s another story.