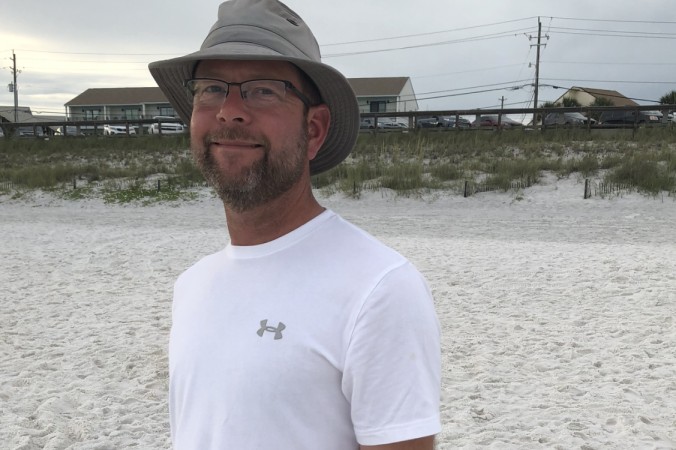 I grew up in the “Bible Belt” of the United States, a region in middle America where everyone I knew went to church and at least claimed to be a Christian. I heard about God and Jesus beginning at birth. My parents made church attendance a priority and we hardly missed a service, except for illness or extreme circumstances. At 15 years old I was baptized to obey the commands of Jesus. From this point, I believed God required sinless perfection to remain in his good graces and anything less brought condemnation and an eternity in Hell. I tried really hard to be good, but soon found the fear, guilt, and shame of sin even more oppressing now that I professed to follow Jesus. Quickly realizing that sinless perfection was out of my reach, I gave up any hope of heaven and began a period of severe rebellion against God. Since there was no way to avoid Hell, I didn’t think I had anything to lose. About ten years later, by God’s grace, I began to read my Bible. This time I read it myself, with my own eyes, and heard a completely different story. I read through the Old Testament. I remembered from my youth the stories in Genesis, the Exodus, God’s Law, and stories of David and his mighty men. I remembered the prophets pronouncing God’s judgement, but this time his wrath was discipline to pull his people back to him! The angry, vengeful God of my youth was now actually a loving God who wanted nothing more than to draw his children to himself! He was a good and just God, who couldn’t and wouldn’t ignore evil, but he was also a redeemer God who would do what was needed to save his people.

Then came the New Testament with its revelation about Jesus! Jesus wasn’t an angry preacher condemning everyone, nor was he a mild mannered sissy scared of confrontation. Jesus is a freedom fighter. He fought evil at every turn. He came here to set things right, no matter the cost. Jesus became my hero. His debates with the religious elite are legendary! I could see him standing up for me when he spoke up for the woman caught in adultery. I felt his love when he wept for Lazarus. I knew he loved even me when he prayed for all the believers.

As I read my way through the New Testament, for the second time, the way Paul’s letter to the Romans summarized the gospel, justification, sanctification and God’s sovereignty really put all the pieces together. Then I got to the end of chapter 7 and realized who I was and what I needed. I needed the power of the Holy Spirit to live a new life. I needed the true Gospel of Jesus. I got down on the carpet in my living room that morning begging Jesus to forgive me for my wickedness and to fill me with the Holy Spirit. From that day to this one my life has been radically changed. I’m not perfect, but I’m way better than I was and by God’s grace alone I have a hope that cannot be shaken!