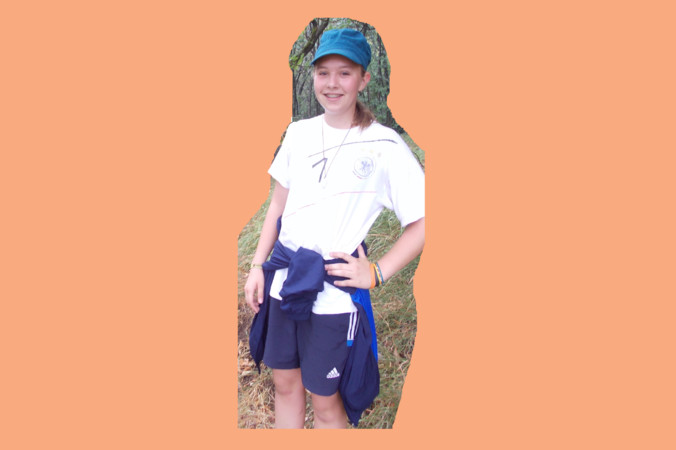 A passion for football… But the parents do not want you to play in the club because they think it's too stressful to do the whole driving services. You are really passionated by playing football and you practice every day at home on your small field. And then somebody aks you: Why don't you play in a football club? Correct bad feeling I must say. Every time you hear from others what went on in the football games on the weekend you feel this pain and the deep feeling that something must really change. But how could that be possible? I did not know an answer to that. When this happens to you, you may also desperately say a prayer, for a whole year, again and again, and ask God that he may do something to change your situation. At some point, I simply thought about to write a note, how I often do it, and simply to think it over, and thinking about why I want to go to a football club and at which points I am perhaps still uncertain. This list I simply put it in my pocket then and went on thinking what I was supposed to do now. I had no idea if it would somehow be possible to retune my parents. Anyway, my list then landed unintentionally with my pants in the wash. Not until after the pants had been washed, I remembered that I had forgotten the piece of paper in there. I wanted to get the paper out when I realized that the bag was empty. Since the sinking feeling came over me that my mom had probably found my list when sorting the laundry … I had not actually intended. When they came one evening to my room and asked me if I had a great wish for, everything was clear. I was stunned and amazed and did not know what to say. When my mother finally heard from me what she wanted to hear, she told me that she and my father had again talked about it together and I was so sensible and safe I could organize a carpool and I should try this with the club. I was indescribably happy and thought only one thing: that was a miracle from God. No one else could have changed the situation in this way, and done this precisely so that my biggest dream could get fulfilled.

God has shown me through football how great his love for me is and that he loves right me. And that was only the beginning. On the football leisure at Pentecost in 2013 I learned that God loves not only the goalkeeper. There a football player who has played at a high level football told something special. This football player left his entire football career to live for God. I also wanted. For I knew that God wants to give much more than football can ever offer. I've done this one small step on 27th Mai 2013 and gave my life to Jesus. I was overwhelmed by his grace he has shown on the cross. He died so we can live, so that we are no longer separated from God, he has conquered everything what separates us from God, the loving father. Since Jesus is my friend. And he has not only provided me a year later that I was also allowed to play on my favorite position in goal in the club. By living with him my life is overfilled with joy, peace, love and patience. I may now watch his kindness every day. And he shows me the way through good and bad times. In me there is living an invincible force that can not be stopped by any power in the world.

And I learned to listen to him, him who has the best plans for my life. When I recently cycled to our lake to work there at the checkout, I was very late and wanted to get there by the shortest route. On the way I asked God which way to go along: the direct or the way going around. And he told me seriously, I should take the detour. Unfortunately, I was not thinking at the moment and I was only fixed on the idea that I was going to be late. Well, but as I drove along the direct path, what did I see? A construction site. I had no plan of a construction site that would make my way hard, I had not expected it. If I had chosen the other way, I would have been faster to the finish. But I can tell you this: God's ways are perhaps sometimes crazy, but guaranteed awesome. And that's what I just experienced once again: I had applied for two organizations on a voluntary year abroad. According to the applicants days I got one rejection and from the other organization I definitely had a commitment. Because I only had one possibility, I knew what I would do. I now had a job in Tanzania, the country where I grew up, and I wanted very much to go back … But then I read on 28/12. in my every day Bible reading in a devotional book by a group of World Mission. And there is a prayer for a country or nation in the world every day. On this day it was Fiji. When I read that, it somehow touched me in a special way. It met my heart, as it has never happened before. It was touching me and I could not forget. And so I had the question what God probably wanted to say and why he showed me something, and if this country perhaps would have some special meaning for my life… but I really had no idea… But then all of a sudden I got a phone call, my mother told me. Amazingly, the other organization, where I had applied for a FSJ, was still interested in me. The director would want to talk to me and because I was not at home, they had told my mother that they still had a job free, where I could go to you. And this job was in Fiji !!!!? When I heard that, I could only think: What ?? God you're crazy … !!! …? This is at the end of the world from our country… The next day I called back the organization and they told me that the other candidate would have canceled all of a sudden and they had actually always had prefered me for this position… they could imagine very good that I would do this job in Fiji. – And all this was soo surprising …! But right in this situation I want to especially trust in God's guidance, even though I can not understand much of what he's up …. His plans are much greater -sometimes crazy, but awesome … guaranteed! It is amazing and very different from what I had imagined … that's all I can say. I have decided to go to Fiji and am curious what's coming …!

This is in truth my life – a passion for God.

Do you share my passion? I would be delighted to hear from you! I can tell you more about the life with God and what he is doing in my life. If you still do not know him- let him act in your life- he can really change! And if you know him, it would be very interesting if you have experienced something similar …

…Please tell when there are any spelling mistakes =)