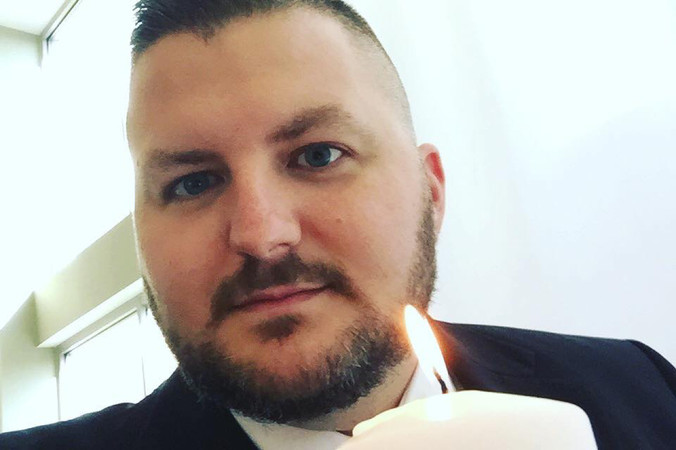 My name is Brandon Cannon. My story is the story of a guy who always seemed a little out of his element. Ever feel like you were waiting to finally arrive? If not, nevermind. However, for those who know what I'm talking about, you get it.  At every point in my life, I was always waiting to finally feel like I fit in my own skin. Throughout being a kid, I couldn't wait to be a teenage. As a teenager, I couldn't wait to be an adult. As a young adult, I coudn't wait to get my career started, get married, and have kids. Finally after having all those things, I remember having a moment when I said to myself, "Is this it?"

I was surrounded by everything I had worked hard for yet was miserable. I had a great wife who loved me. I had two beaufiul little girls who were and are perfect in every way. I was in vocational ministry serving an amazing church as a music pastor (which I loved). However, I couldn't help feeling like I was dying on the inside.  I began to pray harder and harder yet it got worse. I began to fast and pray, yet this feeling of death continued to get worse. I bound evil spirits and loosed the Holy Spirit into my life and I sought the wisdom of my spiritual mentors and friends.  Nothing seemed to help. At one point, I told my wife I was about to just quit ministry saying, "This isn't what I signed up for."

One day, at my lowest point, I said, "God, I'll do anything. Just please tell me you're still with me." It was at that moment God put into my heart that I was born to plant a life-giving church which would reach people for His glory. I remember saying something like, "Okay… anything else I can do? Please?!" Nope. That was it.

I didn't know anything about planting a church so I found an amazing organization called THE ARC (Association of Related Churches) and began learning how to start a church. My small family moved to a city named Bowling Green, Ky without knowing anyone in the city and began doing what we NOW know is called "parachute drop church planting". It's suppose to be the hardest kind of church planting there is. Trust me, we didn't know that at the time.

Over the course of the next ten months, we met people, told them about our crazy God idea, got a lot of "NO WAY" answer, but slowly built a launch team of about 30 people for the big day which was on February 5, 2012. It was a long and grueling ten months full of moments where I thought everything was going to fall apart. However, at every step along the way, God always seemed to work things out at the last possible moment.

We had decided to launch our church in a movie theater because… well… we didn't have many other options. The general manager of the theater was not a believer yet seemed to be very curious about what we were doing. We had practice services in the two weekends leading up to our launch day and he would sneak in and watch. All of our team was praying he would be the first person to get saved during our first service.  We all said, "He's been running from God so God brought the church to him."

On the morning of our first service, we were so excited. We couldn't wait to get on the property to see what God was going to do. However, as we pulled on the parking lot there were police cars everywhere blocking our path. When I got out of my car, I was met by a detective who said someone had been shot in the parking lot just a few hours earlier. They were not sure but suspected it might have been suicide. I couldn't help but ask, "Who was it?" The detective told me, "I'm not sure about his name yet but I know he was the general manager of the theater. Did you know him?"

I now know what shock feels like. Our team had just met with him a couple of days beforehand and over the past few weeks had talked with him almost every day.  We had no idea he felt so lost and alone. When my team learned who had been killed they all fell apart. There were about 10 of us guys who had arrived before anyone else and we were devastated. The detective continued, "I don't konw if we can get the body moved in time but if we can, you should really have church here today." After I protested he continued telling me that even though he wasn't much of a religious person, he really felt we should have church.

Well, my team and I went around to the back of the building and while waiting to be let in, all of the guys were upset and crying. Finally one of them spoke out and said, "Pastor, I don't think we can have church today." Everyone else slowly began to nod their agreement. I looked at our guys and with a courage I didn't feel, I said, "Look everyone. I know this is hard. It's the worst. However, we've got to have church. We need to tell everyone who comes today that there's hope. They don't have to go out the way he did. We need to tell everyone not to give up. If you want to go home, I understand. However, I don't care if I have to set everything up myself, I'm having church today." Immediately I could see everyone gain a resolve with their tears and they all began unloading the trucks.

I excused myself, went around the side of the building and threw up. I was so scared. I felt unqualifed. That speech was great for them but I was a wreck. Not long after that, my wife found me and said, "Don't you remember all those times when we almost lost everything during this process but somehow God made it work? If he did it then, He's not going to leave us now. Just get up there and be who God made you to be." She always knows how to speak to me. I joined in the set up process.

Well, the were able to clean up the parking lot just before the first guests began showing up. When I stood on that stage for the first time and annoucned, "Welcome to Real Life Church", it was our team who clapped the loudest. Only they knew what the journey had truly cost us. In that moment, standing in front of all those people seeking Jesus and crying with my team, I felt at home for the first time. I finally "fit" in my own skin. I was made for this. We had 196 people show up for our first service and six people began a relationship with Jesus Christ that day! We continued to stay in the theater for the next several months but eventually moved into a more permanent location. God has continued to use our story to encourage people that anything is possible. God prepares you for the most important moments of your life.

The lessons I have learned is to trust in Jesus. He really is faithful. He really does walk with you through life's biggest struggles.