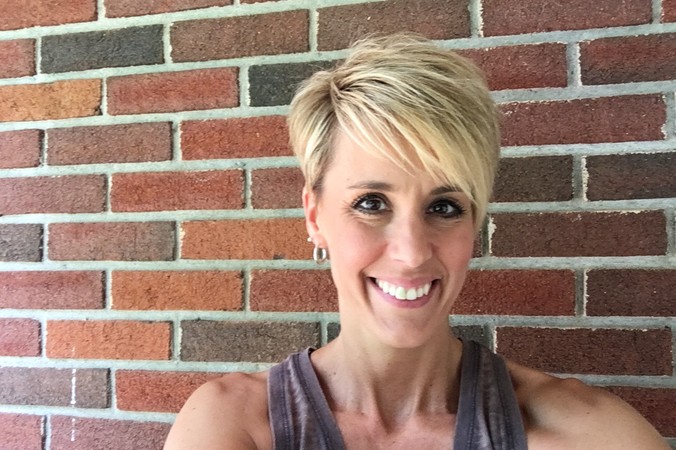 In The Hand Of God

Hi, my name is Angie and I was radically changed by the grace of God!

I was born in Michigan into a home that was full of abuse and chaos to a controlling, alcoholic  father and co-dependent mother, and was unaware of how dysfunctional probably until age 11. Like many young children who grow up not knowing any different, that life was my norm. Until one day my eyes were opened to the abuse. I watched my fathers wives and live in girlfriends suffer at the mercy of him. He preyed on weak women. He was super charming and made them feel special, for a while that is.  My mother left my dad when I was 7. Oh, I could have gone with mom, but she traded one abuser for another and at least one was my father whom I had a bond with, so I chose to stay with dad. I did on the other hand have to choose that over my siblings, which was difficult at such a young age. They all chose mom because my dad wasn't their dad. I got to visit mom sometimes and maintained a bond with her, but she let me figure out for myself just what kind of man my father was. It had become out of her control as the court finally made me decide to choose a parent because of a two year custody battle. At 9 years old and I had to choose between the two people I loved most. Still one of the hardest decisions I've ever made to this day, but God had a plan the whole time. As I aged and my eyes started opening, my dad sensed I was on to him and his manipulative games he played with women's emotions, and mine.  He used me as bait to get the ladies to feel sorry for me, to control them into staying longer when they'd try to escape his abuse. I became vocal about it, trying to talk these ladies out of a relationship with him. It was hard to care for each of them knowing eventually it would end with them leaving. I became resented by my father. He daily called me terrible things, comparing me to my mother, who he also resented for leaving him. (He resented anyone that left him.) Finally at 14 I could no longer take it! I too left. I packed all my things and moved about an hour North with my mom and her husband. Needless to say, it wasn't a happy home either. I hated watching my mother cater to someone so hateful to her, who also was a substance abuser.  I simply didn't understand why any woman would do that and I detested it, but I loved my mother dearly. After about 6 months my 7 year older sis and her hubby from Ga. paid us a summer visit. I looked at mom and said, 'I'm going to Ga. with Melanie."  and with no argument, my mom let me go. I turned 15 that fall and throughout my high school years lived with 3 different families. My sisters marriage was also to an alcoholic abuser that ended in divorce and she moved the second husband in and he had even bigger issues and dependency on drugs and alcohol. Somewhere in the middle of all of this I had a young man/schoolmate lead me to Christ. I accepted Christ as my savior at the age of 17. I spent my senior year living with my best friend and her parents who were more stability than I'd ever had. I got to see how a real family operates. After graduation I found a roommate and moved out on my own. I was motivated to become independent and self sufficient, so I would never have to depend on a man like my mother did. I also wanted to prove my father wrong because he told me I was trash, that I'd quit school and become pregnant at 16 because I was a whore like my mother. (None of which is true)

I was an angry, fowl mouth little teen with a bad attitude. I thought I was stupid because it's what I heard daily for years come from the mouth of the man who was suppose to build me up, my father. My mothers example wasn't great as she was just trying to survive her poor choices and provide for 5 children, and that anger drove me to choose better at the time. The hate for the life I'd lived was motivation for me to better myself and break the cycle. Little did I know God was with me the whole time, holding my hand, guiding my steps, and leading me into his arms. God knew I'd choose him and I truly believe he gave me the hate for what was ungodly. Despite all of that, I still loved my parents. After salvation I forgave my father and we had a respectful distant relationship until he passed away from a heart attack when I was 26. A few months later I would learn of memories that I had suppressed of the sexual abuse I suffered at the hand of my dad. My first reaction was a sickening feeling, but an immediate forgiveness. I refused to let him have that control over me, especially in the grave. He'd had it long enough and I got freedom from it the day I accepted Christ as savior at 17, so I refused to let the past control me again. At this time I'd been married for 5 years and had two small children under the age of 3. My husband was amazingly supportive and through prayer and seeking God I was able to not let it consume me. I've now been married for 21 years to that same amazing man that I gave my heart to at 21 years of age. He's a godly man, raised with godly values. Together we have traveveled a journey that's for another testimony. Every unfortunate circumstance in my life was being crafted with detail by the hand of God. I know without a doubt in my mind his hedge of protection was with me. He gave me the gift of salvation, through the blood of Jesus Christ and the power of the Holy Spirit for strength, to be able to discern the life I was born into. You see, when we choose God, we are made aware of the rights and wrongs in this life, then we get to make better choices that become easier for us to make out of the love we have for the Father, and I wanted nothing more in this life than to bring honor and glory to my God! He's my greatest love then and he's even more precious to me now as I've spiritually matured through the years. I do not resent my past. It's help craft me into who I am today, but only because I was in the hand of God the whole time and I took my chance on him once he was revealed to me. I'm forever grateful I was led to the cross and I will always remain in the hand of God!