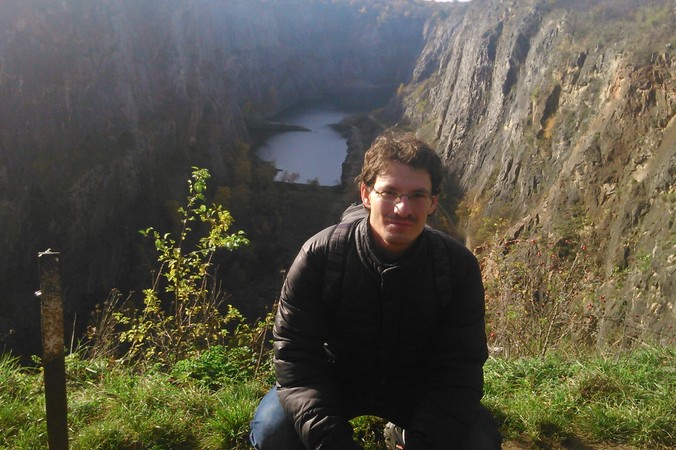 Is really the purpose of life completely different?

My name is Petr (Peter). In 2012, I was twenty eight and I live in the city of Mladá Boleslav (The Czech Republic).

Despite my origin from a non-Christian family I have believed all the time God exists. It almost did not manifest in my life: I prayed maybe once every six months when I made a mess but otherwise I lived a normal worldly way of life with all the trimmings.

Good people but is it a truth?

My first personal meeting with Christianity came about at the University in Ústí nad Labem. A girl, my school fellow, invited me to their "pancake party" organized by their Christian group. I was a poor student, that´s why it was naturally attractive for me. We played various games talking about many things, eating pancakes – and, at the end, their leader Tomáš Uher brought a Biblical message and he invited us to the Gospel of Mark study on Wednesdays. I also involved it because that schoolmate who was my best friend also used to visit this study and, furthermore, because some small snack took place there every time. The Bible readings interested me a bit but, at the beginning, they didn´t speak to me very much as I wasn´t sure if this information was correct. Of course, there were excellent things connected with it – trips and other activities. During the holidays, an English Camp took place; I enjoyed English, that´s why I welcomed this opportunity very much. We could talk with native Englishmen, there were games, sports and Christian programmes in the evenings where I started to realize there could be something in it. But, in the first place, I was surprised that those people were friendly, cheerfull, enjoying even small things – and I wasn´t able to understand where this optimism of theirs came from. At that moment I knew that I was actually happy with those people. So I visited the group during my third study year, too.

A major turning point came at the moment as Pavel Kábrt´s lecture on the topic: "How did life come into existence – by evolution or by creation?" took place in the group. It was a period when I was thinking very much about the question how it actually was – if we had originated from Adam and Eve or evolved from monkeys. I have been a very inquisitive person from my youth, so I wanted to know the answer. Thus, this lecture came into my life at the very right moment. I hadn´t favoured any point of view in advance – or the evolutionist one either the creationist one; I wanted to know the truth only, however it was. One can hear now and then – when speaking of the evolution – a so-called missing link mentioned; it gives the layman sense a puzzle piece only is missing while everything else is fine. But, listening to that lecture, I could learn that, in fact, this theory is full of holes like a strainer. As soon as whichever issue of this theme has been scrutinized the whole evolution theory collapses like a house of cards before your eyes. When the problems with the old age of the universe and the ones of the earth or the ones connected with the spontaneous origin of life, with homologies, with fossil finds, with the complexity of living organisms and with many other issues are faced – the fact always emerges that the evolution makes no sense. Even the most primitive organisms are very complex, rather resembling biological mini-robots than a random clump of something – not to mention the higher ones! For example, could an eye come into existence without knowledge of optics or an ear without knowledge of acoustics?

Hereafter, I found this topic so interesting that I started to read various articles, booklets, I saw some documentary films and at last I came across the "Evolution – facts or a fiction?" book. Once, travelling by train from Ústí to Boleslav, I finished some last chapters of this book mentioned above. It brought a lot of good logical arguments for the creation theory. It quite made sense, so I thought quite deeply about it once more after having finished the book. And then I got it – I realized suddenly: it means after all that my beloved parrot which brings me joy and amusement at home and which shows his love to me every day also must be a work of God´s hands. And just at the moment it dawned on me. My eyes opened and I suddenly was a hundred per cent sure the whole world, all plants and animals including humans ane work of a supernatural, intelligent Creator.

Since then, I had no problem any more to believe the Gospel. Besides visiting the groups, I also started to frequent church services regularly, listening to the Gospel with an open mind. Here I made good friends´ acquaintance whom I had lunches and went for trips in the surrounding countryside after the service with. Step by step I began to explore the Christian life is different in some sense – warming the soul and nice in a special way. Not long after, I came across a brochure entitled "The Book of questions", answering  important questions on God and Jesus. With a great interest I read about it – who Jesus was, what he did and that, thanks to him, I can have the everlasting life. This booket also included an invitation to pray for the forgiving of sins and to accept Jesus Christ as one´s personal Saviour. So I prayed for these things, speaking quite long to Jesus and realizing I made many faults in my life and I needed his leading. I thanked him for everything he had done for me, for all messes he had ever haled me out of. I wished him to come into my life and to become my Lord. The thoughts also crossed my mind that nothing in the world could offer me anything so wonderful as he offered. The thing was that I was always longing for finding the elixir of an eternal youth and it suddenly was within my easy reach – and not only this! The everlasting life in God´s kingdom where no evil rules any more but the goodness only, joy, love and all nice things you can and possibly you even cannot imagine. So I implored him in that long prayer to give me all these things. I also asked Jesus to let me know if he accepted my request and If I go to heaven. Some seconds after my prayer something happened what – as I believe – was the God´s sign I asked for. It happened in our university dormitory where my ceiling chandelier was turned on but two of its four bulbs only were emitting light. And at the moment one of the  estinguished ones came on for ten seconds approximately and then it again went out  A the first moment it occurred to me: "It started to give light at last. that´s nice." But as it went out again I understood that God probably did it as a sign he answered my prayer. Because that bulb didn´t shine either ever before or ever after!

So I began to live my own Christian life. A vast world of knowledge opened before my eyes. People normally don´t have any idea how great privileges a Christian can be given. More than ever before God held his protecting hand above me. I made a lot of excellent friends´ acquintance, frequenting English   camps, ski camps. film camps. I know I have always wanted to belong to a group of people parcipitating in camps with many beautiful common experiences. Nevertheless, I had never succeeded in it till I met Christians.  My faith was also enhanced by God´s powerful deeds he was doing during my university studies – and I also believe I wouldn´t graduate without them. In short – my meeting Christians and Jesus personally brought end to all boredom and suffering in my life. I am very thankful Jesus changed my life so much. Before I often was full of anger and grudge against other people, very selfish, wanting to praise myself only. I took only from people and I myself gave nobody anything. I realized how many bad things I do in actual fact although I always made efforts to live a normal decent life all in all. The more i learnt to know God the more I took in how much I sin. I long now to serve God with my whole heart and soul, I want to give myself God in order that he uses me as an instrument of his righteousness. Formerly I wasn´t able to appreciate anything very much – including even my life. And now I am happy so fantastically to have my life and to be a human created in the image of God. Never before I was able to realize so much how excellent it is to have one´s life. And now I konow the everlasting life espects me! It is simply super! Thank you once more, my Lord Jesus! You belong Honour and glory belong to you for ever and ever! Amen!

PS: If you are interested in anythink about my story or you woulk like to read one another story about a miracle I experienced, send me message and I will respond you and the second story will send you!