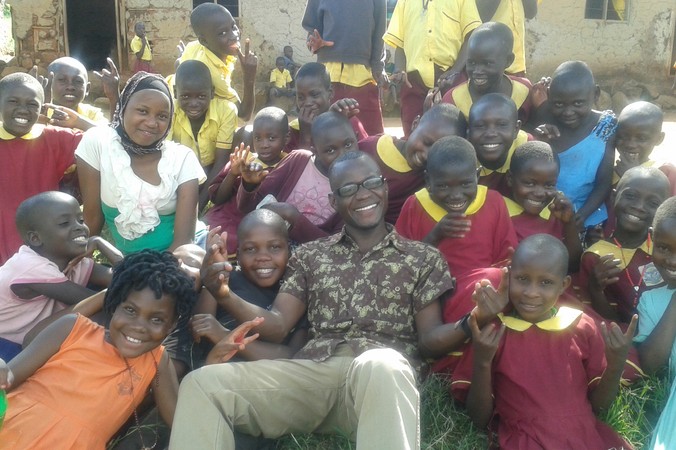 It is four years now since I stood up in my local church and announced that I would be giving up everything and starts helping people, I wanted to explore the possibility of setting up a primary school for orphaned and vulnerable children. As part of my research, I rented a house to some of the children still living in the Orphanage where I stay with them. These children came because of many challenges in their lives and in their own words; they experienced another way of living.

The concept of a home for orphaned children began its embryonic life when I was moving on streets of Kampala in late nights and I found many young children sleeping on the streets especially young girls under ages of eight(8),I saw and experienced the situation ,after one year later, the vision has grown and finally is taking shape.

Having children in home was partly experimental wanted to see whether we could maintain a family sprit with five to fifteen people? Would three weeks be long enough to make a difference in their lives forever? Would they like my method of working, praising and praying? Would we be able to communicate since some of them were leaving on another side of the country?

Thanks to Lord Jesus , that he has been able to keep us up to-today. We have an amazing time, we are trying to visit new places, meet new groups of people,praying together  and visiting excitement places for children so that I may flash off sad memories as i create profound and new good lasting memory. Since I started living with children, I am carrying them in my head, it is like mantra: “No child should sleep hungry” Yet millions are starving and dying every day.

One night, four scruffy little girls, each with her little sack, accosted me, begging. They asked me in Luganda (local langualage), if I could spare food, They looked so pathetic and helpless; so grubby from head to toe and ……so HUNGRY! After a few questions I discovered that they had a mama but no papa, which by UNHCH definition meant that they were also orphans. I recognized immediately that they were not only vulnerable but in danger. They could be lured by unsavoury characters, bad young men, even paedophiles (Yes, they are common and exit in Africa) who would make them perform dreadful acts with the promise of food and money. I sent them home laden with dried beans and Posh (Maize Flour) and big hugs! Then the grim reality hit me! They, too, will one day become teenagers-survivors, not of cruel wars, not of HIV/AIDS but of STARVATION.

Every surviving child has potential. The majority does not want to remain victims or beneficiaries for the rest of their lives. They want the opportunity to go to school, study, and university degree, Find a job, work hard, be independent, and become a vital player in the development of their country,Many are telling me that they want to be Pastors! They want to have access to enough food to eat, clean water, secure shelter, adequate health care and, most of all, real love. That’s why, with the dedicated support of a small committee of people,we feel to show God`s love to these Child.

That is my story,But expect many are coming