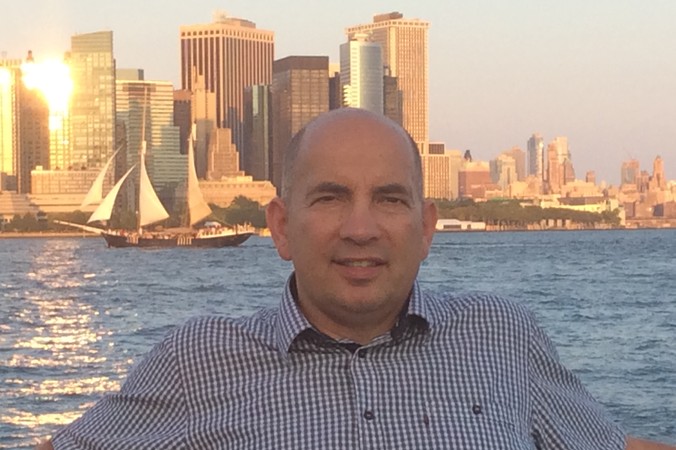 Life took on a meaning!

I still remember when I stood in front of a mirror in a small co-operative flat of my parents, and my sister asked – why are you immigrating to the USA? I replied - for the money, but really it was about having a normal life together with my freshly-formed family because Poland back then was still ruled by communism.

But God had another, much better goal for me. Shortly before the decision to emigrate I got married to Gosia. We were also expecting our first child while already having the US visas in our passports and tickets to New York in our pockets. The emigration meant also that I had to discontinue my law studies at the Jagiellonian University in Krakow.

Our trip to the USA - a few months before the first meeting of the Polish communist government with representatives from the Solidarity opposition and from Catholic church since the martial law ended, called the Round Table - has become a major test to withstand adversity thrown at us by 'fate'. When we arrived in New York, we were without any help from our family. After a week of sleeping at a cheap budget hotels and friends' places, we managed to rent an apartment. With no furniture for some time we slept on newspapers instead of mattresses in sleeping bags that we brought with us from Poland. Soon after that I had found a job that paid minimal wages, then later one that paid a little better - reloading trucks. After a year I was able to get a position of a driver at a largest shipping company in the USA , where I work till today, but in another function, as an industrial engineer .

In the following years of the immigration I have completed master studies, our two sons were born, we have bought a house and received the citizenship. On the surface everything looked great, we were slowly acquiring different things. But we have fought marital problems on the way. My wife, during my absence when at work or in school, was burdened beyond her strength with raising our three sons. The threats of divorce, her depression and my helplessness increasingly led us to believe that all this is completely pointless. I distinctly remember that summer, when we felt like we lived in a desert.  Spiritual desert. Together, we asked ourselves the question - why live at all? Why this crazy carousel of work and classes? And the accompanying emptiness in our hearts?

The first breakthrough-moment for me came when Gosia's friends from Poland came to visit us. They told us about God's plan for each of us. I was an atheist and did not agree with what they were saying but before they went they left us the Bible. I reached for it a few months later, during a break in my studies. I wondered for some time now what this book was about. When I read the Gospels of Matthew and Luke, the power of God's Word began to change something in me. I began to look for evidence that I could trust the testimony of the Holy Scriptures concerning the resurrection of Jesus Christ and in the end I have accepted it. Soon after, I decided to take a step in faith and in prayer I gave my life to Jesus. I confessed my sins to him. Adultery, blasphemy, infidelity, anger, rowdiness were just some of them.

There was no lightning and thunder; I woke up the next in the same bed. But slowly some changes began to happen in my life. I stopped swearing almost from day to day. I could not say a curse knowing that I pray and praise God with the same mouth. My life filled with peace, I stopped worrying about 'what will happen tomorrow'. God continues to do amazing things, answers prayers in difficult situations at work and within the family, confirms all sorts of life choices. This joy, peace and knowing the sense of life made me want to share with others the good news about Jesus. I am amazed again and again that a former atheist can talk with such an enthusiasm about God's love.

If you struggle with a sense of emptiness in your life, if life has lost all its meaning for you, please write to me. I will gladly talk to you.