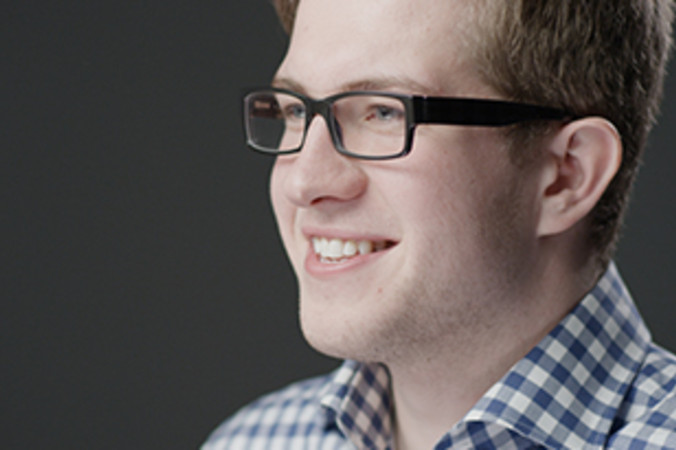 I have always been self-motivated and driven. On October 5, 2010 I got my first concussion during a volleyball game. I was taken by ambulance to the emergency room, where they told me to go home and take an Advil. It was the first of seven concussions.

I ignored the symptoms for several months until the pain became unbearable. I had to drop out of college. I wasn’t performing well at work. I spent a lot of time just sitting in a dark basement.

I spent the next two months in and out of doctor’s offices -- specialists, neurologists, and therapists. No one was really sure as to what was going on. Eventually, a couple of the specialists started to entertain the  idea that I might have brain cancer.

I never told anyone. I continually lied about how I was doing. I never admitted to it, but I was a wreck. One evening I was driving home late at night and attempted to pull my car in front of an oncoming semi truck but I could not turn my steering wheel. I had two hands trying to pull my car towards the truck, but nothing happened. We sailed right past each other.

A week later I was in my room consumed with the thought of dying of brain cancer at 18. I wanted to take matters into my own hands. So for the second time in a week I attempted suicide. I was going to put my mouth over the exhaust pipe of my car, but I could not find either set of my keys. Later I found them both sitting on top of my night table. I didn’t tell anyone of this for several months.

That summer I got two more concussions. The pain was getting worse again. My parents kept suggesting that I go to our church and have some men I respect pray for me. I wasn’t too keen on this idea, but because of my parents’ persistence I eventually agreed.

They prayed over me and not long after, all of my pain and symptoms disappeared. Just like that. I felt reassured that God was with me and that he cared about me. I rode that spiritual high for about a month and then when I was feeling 100% and doing well in school and at work, I figured that I was good to go on my own again. “Thanks God, I’ll take it from here.” Everything was going great.

A year later a received another head injury. I was in the worst pain I have ever felt. My parents decided to invite the church leaders over to our house to pray for healing again. I don’t recall much from their visit, except for when we took a moment of silence to listen to what God had to say. During this I heard clear as day, a voice saying to me, “Not right now.”

When God told me that he wasn’t going to heal me at that time, it verified three truths: God is with me, God has a plan for me, and God is in control.

With this new reassurance, I began to pull my weight in rejuvenating my relationship with God. I bought a Bible and immersed myself in it for the first time in years. Even though I was in the worst physical pain of my life, I was finding more joy than ever before.

A few months later, I was driving by myself through my favourite spot in the mountains just spending time in worship. The song hit the chorus:

Christ alone; cornerstone Weak made strong; in the Saviour’s love Through the storm, he is Lord Lord of all.

At that moment a strange tingling sensation took over my head. Again, it’s not a feeling that I can easily explain beyond the fact that it was surreal. After a minute or so the tingling left and all of my symptoms went with it. I knew I was healed again.

God was showing me that he could heal me in his own way - and that there wasn’t a special formula. I felt healthier than ever and went full force back into my activities.  My relationship with God had been repaired and I realized that I always need him in sickness or in health.

Going forward, I know that life will not always be happy or easy. Nor should it. Over the last several years I have learned that it takes adversity to shape character. I also learned that I cannot function in life without God; if it wasn’t for him I would be dead three times over.

God loves you and created you to know him personally. He longs for you to have the kind of full life you were always meant to have. So why do people not experience this kind of life? People are lost and separated from God, so we cannot know him personally or experience his love. Because of our sins, we deserve judgment. But God provided his Son, Jesus Christ, as the only provision for our sin. He died in our place, then he rose from the dead.

We must individually trust Jesus Christ as Savior and Lord; then we can know God personally, receive forgiveness for our sins, and experience his love: “As many as received him, to them he gave the right to become children of God.” (John 1:12)

We trust God through faith. You can trust Christ right now by faith through prayer! (Prayer is just talking with God.) God knows your heart and is not so concerned with your words as He is with the attitude of your heart. You could pray something like this:

Jesus, I need you. Thank you for dying on the cross for my sins. I  receive you as my Savior and Lord. Thank you for forgiving my sins and giving me eternal life. Take control of my life. Make me the kind of person you want me to be. Amen

I'd love to answer any questions you may have and help you on your spiritual journey. Just send me a message.