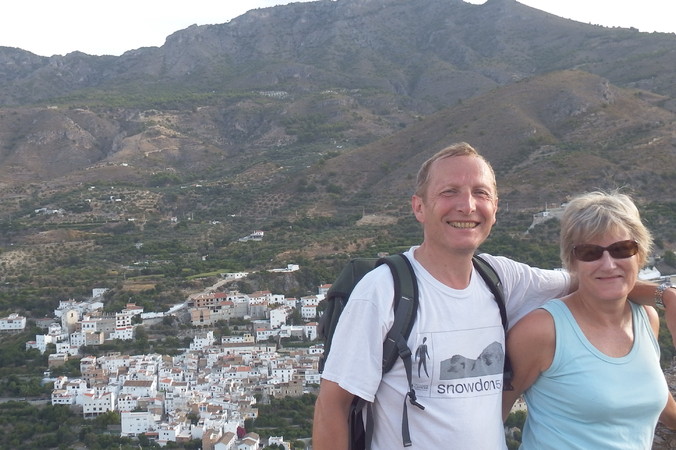 Our Story: 3 strands are stronger than 2

Benoit:  I was brought up in NE France and came to England in 1976 for a year to improve my English – 38 years later I’m is still here! That is due not least to the fact that in 1978, I met and fell in love with a lovely Scottish lassie called Lisbet.

Lisbet:  We got married in 1979 and had two wonderful children.

Benoit: In 1985, my younger sister was tragically murdered; the following year I unexpectedly lost my job and the year after that, my mother died suddenly from leukaemia.

Lisbet: Tragedies and hard times either pull you together or pull you apart. Sadly the latter was true for us. I became determined not to rely on anyone or anything other than myself and took the decision to go back to work full-time.

Benoit: I became increasingly depressed but neither of us realised what was happening as, bit by bit, we began to communicate less and drift apart. We became virtual strangers, living under the same roof. I was unhappy at work and at home.

Lisbet: I gained more and more satisfaction and enjoyment from my career.  My colleagues and clients seemed to appreciate and respect me more than Benoit did.

Benoit: Like so many relationships today, our marriage broke down and Lisbet asked for a divorce. Proceedings were underway when a chance encounter with a friend led to an invitation for her to go to church the following Sunday.

Lisbet: I could escape the strained atmosphere at home and the children were happy enough to go to Junior Church. The service did nothing for me! But the children had such a good time that they asked to go back. After the service the following week the same friend gave me a book about Christianity. Intrigued, I read the book in one sitting and returned it asking for more ….I had always considered myself  to be a “Christian” living in a Christian country – as had Benoit- but I had never really asked what that meant. The books were the start of an exciting  journey of discovery - I realised that Jesus really is the Son of God and had been raised from the dead. If that was all true I wanted him in my life!

Benoit: I started to notice changes in Lisbet, which I couldn’t explain. When Lisbet asked me one day if we could give our marriage another go, I was sceptical but intrigued. I decided to find out more about this Christianity, which was having such an effect on the way she now lived her life and was the reason why she wanted to be back with me.  I joined a men’s discussion group and a few months later I too became a believing Christian.

Lisbet: The next couple of years were bitter sweet. The challenge and hard work involved in repairing the marriage, forgiving each other, rebuilding trust, communicating and rediscovering how to laugh together, was not easy. But now we were not just a couple struggling on our own – there was a third party – God. We were both now on an exciting faith journey together and had the Holy Spirit to help us get back on track and empower us to live differently in the future.

Benoit: It took several years to reach a place where we both felt strong and secure again in our marriage. In 2004, for our Silver Wedding anniversary, we renewed our vows in our church in front of family and close friends, especially those who had prayed and supported us on our journey.

Lisbet: Knowing how easy it is for things to go wrong in a marriage we have become involved in Family Life UK. A group helping people in their relationships by providing basic tools for communication, conflict resolution, trust, forgiveness etc. Sometimes, just hearing that a marriage, which was over, has been restored can be an enormous encouragement.

Benoit:  Attending a recent wedding we have been reminded of the powerful vows that are exchanged. Marriage is for life, really, despite what we might read in the media from time to time.

Lisbet: We really are no different from many other couples and our involvement with Family Life has served to open our eyes, even if this might sound naïve, to the fact that a relationship like marriage is one that needs working at, every day.