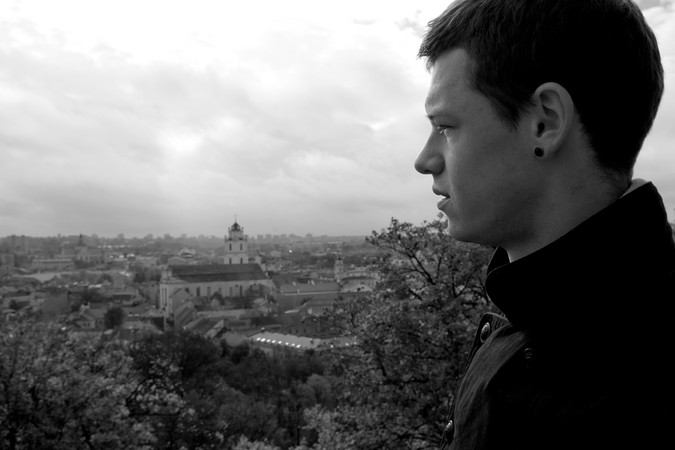 From gods to God

I used to live in waiting. I used to think to myself: "If only I would get a chance to play on this team, if only I would get this girl or that car – I'd be happy." But whenever I would achieve or get those things there would be no real happiness. I was missing something. I was also lacking self-esteem and self-worth. All of my worth depended on my achievements and on what others thought of me, or what others said about me. I wanted everybody to like me. I wanted to be the best at everything I did: to be at the top of my class, to be number one in basketball, and to be the most popular among my friends… I was extremely envious because I longed for acknowledgment. Even though others may have not noticed, I would be burning inside whenever somebody else would receive more glory and fame than me; especially whenever somebody would be "better" than me.

At the same time I wanted to be good. I am not sure why, but I believed that God existed. That there existed someone greater than me and all of us. That he had some sort of a standard according to which we should live and that we should somehow reach it. But he had a higher standard for me. I had to lead a life that would be morally better than that of others, but I would fail all the time. I couldn't live up to my own standard, not to mention God's. Regardless of that, I liked him. For some reason… More than that I wanted him to like me, even though I feared him at the same time.

However, my real god was basketball. It absorbed all of my time, all of my attention, energy, strength, etc. It was my greatest love. After tranfering from one university to another several times and having played in several different teams I discovered something very crusing. At 22 years of age and just ready to start my career I learned that I would not be able to play professional basketball anymore. I had developed some serious back problems and I felt as if my whole life was shattered. In that one moment everything I had been building my future on crumbled like a house of cards. I was looking for meaning in the midst of this. I wanted something that I could hold onto that wouldn't collapse in the end. Just like all of the things that I had tried to latch onto they burst like a bubble. They just didn't work and they didn't do anything.

I then went on living an "ordinary" life. I finally graduated from university, had a fairly well-paid job, but I still hadn't found that meaning or those eternal things that I was looking for. Nonetheless, I knew that the one thing that I need to latch onto was God and I was seeking him. Eventually, I ended up in a small town in Lithuania, to which I ran after quitting my job and my Master's studies. I also broke up with my girlfriend. I knew that there must be something more to life than just sleep, work and food. I was searching for the meaning of life, my purpose and my calling. I wanted to do something that would be important, and I wanted to know God.

One of the ways I got to know God was reading the Bible. I didn't know whether that was the right method, but I thought so. Actually, that was the only method I knew. I thought it is at least culturally acceptable. I used to think there were many ways to get to God. That all religions were talking about the same God and were leading you to the same God. It is only us in Europe, in Lithuania who are using this supposedly Christian way.

I was contemplating and praying about all of this, and one day I received a call from my American friend. While we were talking he asked me, whether I could be sure that I will go to Heaven. I wasn't sure that Heaven even exsited but, seeing the reality of death around me, that physical lives come to an end…I could not believe that this life was all there was. I thought to myself: "If I would be going down the street, and I would be hit by a car, would that be it? Every tear that I have shed, everything that I did in my life would be of no importance whatsoever?" I wanted to believe that Heaven existed. I thought: "If it does, I definitely want to get there." But I said, that I did not know and I had no idea if I or anyone could actaully get there. Moreover, I thought that it would be extremely arrogant to think that you can get into Heaven. If there is such a place, because what man could ever know that he had done enough good to get there? He told me that a Christian can be sure that he'll go to Heaven, but not because of what he has done, but because of what God did for him. He shared a Bible verse with me, where Paul wrote that "You are saved by grace through faith and not by works so that no one may boast." That grace has been shown to us through Jesus, God in the flesh, who came to die for our sins and came to die in our place.

That Jesus, had always seemed to me to be just a fictional character. I wasn't sure whether he actually walked this Earth, even though people thought I had been a Christian pretty much my whole life. I did not believe that really. I wanted God to like me and I wanted to do good things for him, but I would fail time and again. But somehow at that time, I understood and believed that Jesus actually walked this Earth, that He was a real person and that He loved me. God loved me so much that He sent His Son to this Earth, so that He would die for my sins.

I knew that I was a sinner. I knew that I was not behaving the way I was supposed to and that I was not living the way I was supposed to live. And when I realized that and accepted it, I felt as if there was a stone taken off of me. I felt this physical relief. I could breath in fully for the first time. I could stand straight and I could love because God showed me love first. My self-worth no longer depended on who or what people thought of me but, it depended solely on that decision of God to die for me. I was so important to him, he loved me so much. I wanted to share that love with the whole world.

I loved Jesus so much! I was deeply in love. It seemed that I had been flying with wings for a couple of weeks, but I knew that this emotion would pass. Thus, I wanted to know as much about Him as I could. The more I studied the Christian faith, the more I saw that it is not a matter of preference, i.e. I like this or that. Jesus did not leave room for other ways to God. He said: "I am the Way the Truth, and the Life." I wanted to know truth, I cared about it. The deeper I dug, the more I realized that Christianity stands on a very strong foundation. That Jesus really lived, that He really died, really rose again giving us hope for eternal life. It can be proved historically. There are logical and philosophical arguments for God's existence. The more I studied all that the more wonderful this faith seemed to me and the more rooted in it I became.

After that I came to like one particular verse, where it is said in the Bible that "You will know the Truth, and the Truth will set you free." And I felt exactly that… I knew the Truth, I accepted Jesus as my Savior and He set me free, and He is offering that to everyone.